My 14yo was asking me about God the other day. I was born and raised as a Catholic as was her father, but neither of us practise. I lost faith in the religion, or rather, I never gained faith in it because the priests in Sunday school couldn’t answer my questions.

We had just been taught the part of Bible where they say, “We are all made in the graven image of God,” and my 6yo self at 6:00am on Sunday perked up and asked, “So then God must be a girl and a boy.” It made sense to me, half the people on Earth were females, the other half males (I was too young to know and had not been taught about transgender people as yet) so it made sense that God would be both. The priest however was appalled at my gall and yelled at me and made me leave the class and stand outside in the hallway. I’ve asked similar questions over the years and gotten in just as much trouble.

If God made the universe who made God?
If Jesus was a Jew, why are we Catholic?
If I’ve never even met Adam and Eve, why am I being blamed for their sins? I haven’t even done anything bad yet?

And so on and so on… And I was always sent outside the classroom.

My young mind reasoned, “My math teacher answers my math questions and they make sense, the God teacher is not making sense, I can’t trust him.” And so ended my brief interlude with Catholicism when I was 6 years old and hence began a life long quest for Divine Connection.

I studied religion in university. I found that at their core all religions wanted us to be our best. But the dogma and the ritual and the misinterpretation of the scriptures by man turned me away from all organized religion. The teachings are beautiful, the people who control how it’s interpreted are not always so. They use it to control and manipulte the masses And blame their respective Gods. And in the end it didn’t align with who I was. Every major religion on Earth had used it’s teachings as the justification for war, hate, subjugation of women, persecution and prejudice. I wanted no part of it.

God just couldn’t be like that. It didn’t feel right to me. None of it.

I spent a lot of time pondering my connecting to the Divine. I had one. It was tangible to me. I knew there was a higher power that I was connected to. But I couldn’t define it.

I have always been introspective. Meditation was something that gave me peace from a very young age. It wasn’t meditation in its traditional sense. That didn’t come till later. I find peace and pause in nature. I would sit by the water And just ponder life.

That’s when I gained clarity on what I can comfortably call God.

What if God was not this omnipotent patriarchal figure in the so called heavens judging over us all, waiting to strike us down for bad behaviour?

What if God was just energy that was aware of itself? And its purpose was to understand the extent of itself? And so it fractured into an infinite number of realities and we are just one of those realities? And because we are creative, and aware of ourselves, are we not then also Divine?

What if God was all of us? And our purpose was to recognize our true nature? Our authentic self? That soul that everyone talks about… What if that was God manifested? What if we are all God manifested, living this life to understand the extent of not only our human selves, but reconnect with our Divine selves in the process? 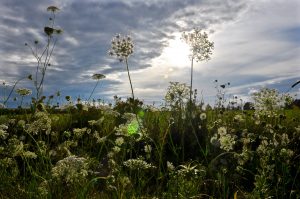